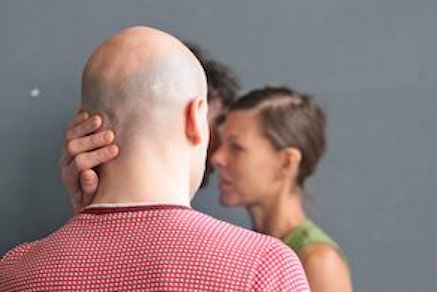 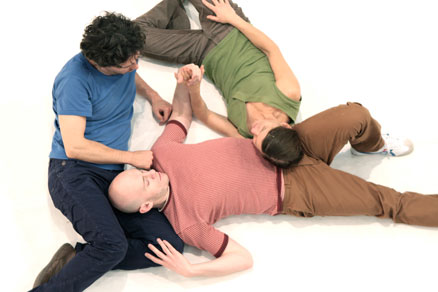 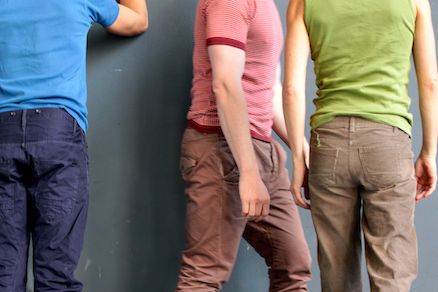 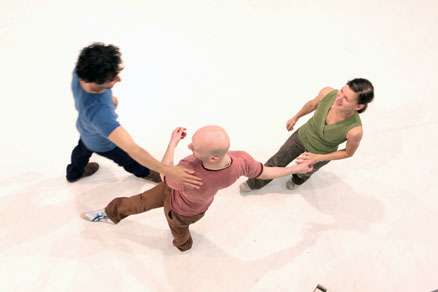 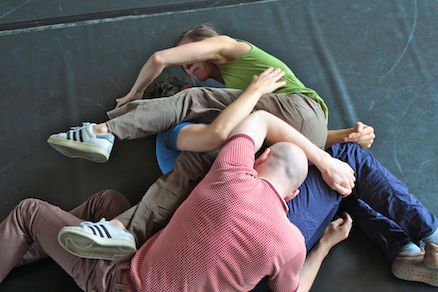 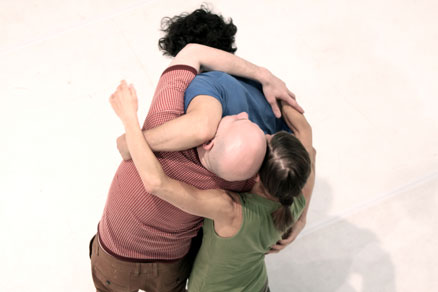 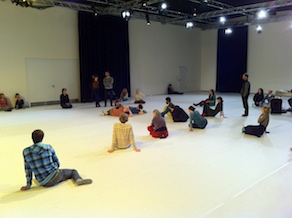 You are entangled in it – an alliance that lays open something tender, at times wild, somewhat impossible. Trying to find moments of rest with each other, you negotiate physically how to move, how to be together. And you talk about things – ordinary things like the weather or cars. However much you are part of the alliance, at times one is excluded. There are moments you prefer to keep for yourself and others you need to share. Not always do we have the same thing in mind.

In 2011 Christina felt the desire to look back in order to go ahead. Several earlier projects were re-traced and re-performed, amongst others her duos with Mart and with Nik. In the process of remembrance there was an ongoing intensive flow of information from Christina to Nik about Mart and from Christina to Mart about Nik.

As a consequence of these revisited processes the desire emerged to meet and collaborate between the three of them. It marked the starting point for their encounter in 2012, which has turned into an oscillating exchange and exploration of insights, leading into known and unknown territory.

The starting point of wait and see was based on structures of communication and conversation in order to frame, construct, channel, examine and follow the development of an encounter – between us three - Mart, Nik, Christina - as well as our encounter with the audience. Our process was accompanied by questions on how to negotiate an equally shared space of performer and spectator, on how to invite the spectator into the work. We are playing with the notion of exclusion and inclusion.
Exclusion is powerful. At times exclusion can be a relieve, even a previledge to be able to draw back and be just an observer. Being excluded - feeling not included - is different; a limitation is enforced on you. There is an inherent complication in feeling excluded or sensing not to be included. Am I or am I not?
The three of us at times split up  - usually two together and one alone - working in separate rooms or at separate times. That way we built constrains into our process, which consciously embraced exclusion. Conversation was explored as an ongoing, simultaneously maintained activity parallel to physical and social interactions in different daily environments.
We navigate through missing links by getting to know each other.  In finding tasks for one another, developing scores and structures to interact, we are testing, mapping, tiptoing around and through the terrain of the other. We sense, observe and invite each other based on the desire to come closer. Eventually we become three voices and three entangled bodies in a negotiation of togetherness, leading to contradictions and agreements in ultimate physical proximity to each other. Throughout the physical negotiation a layer of conversation is maintained simultaneously.
After having shown the work WAIT AND SEE to audiences in Berlin, Tallinn, Weimar, Amsterdam and Viljandi, the ecounters between us and groups of spectators has produced many surprising and different situations – at times humrous, embarresing, tender, contagious. Comfortable and uncomfortable at the same time, a pleasurable awkwardness has found it’s way into the work. What we share is the fascination of encountering the other, in order to see, think and imagine ourselves.