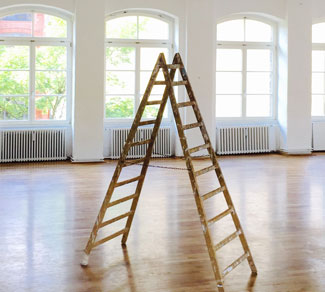 In 2015 Christina Ciupke is developing „editions", a new working format inside of which her artistic partnership are to be re-drafted and extended. In collaboration with other artists and colleagues performative ideas and situations will find a platform for an encounter with a public.

editions is supported by the Berlin Senate Cultural Affairs Department. In cooperation with Tanzfabrik Berlin.

In 2013 and 2014 Christina Ciupke and Igor Dobričić established a collaboration that under the title "(by)invitation" unfolded as a series of unrehearsed but constructed "choreographic" events to which visitors were (personally or publicly) invited. In the first iteration of "editions" - edition#1: to dance, Christina Ciupke once again meets the dramaturge Igor Dobričić, with a proposition of a modified and expanded shared process.

”We are for the last two years collaborating on a practice based artistic research that is exploring the apparatus of a dance performance as we in-herited it from the past. Our interest in the existing dispositive and its history is related to a desire to re-consider the future of a dance as an event, one element at the time. Till now, our research was proceeding through a series of practical performative experiments in which we were gradually adding ingredients, examining each separately and in connection with the others. So in a number of steps we slowly re-assembled all the components without which a dance-theatrical situation, in our opinion is not possible. The only “object” that was left un-attended till now is the performative act - the dance itself. We are now at the point where we were considering in what way we could re-inject the dancing body into the midst of the theatrical machinery that we re-created, while treating the dance as a “choreographic object”." (Christina Ciupke and Igor Dobričić, 2015)

Moving out of the memory of movement into the dance that is taking place in the present moment.
Creating the space of an encounter into which you are invited to enter.
Listening to an interval of transition. picking up the beat of time unfolding, together.
Invoking this shared place where dance still exist between history and utopia.
Between day and night.