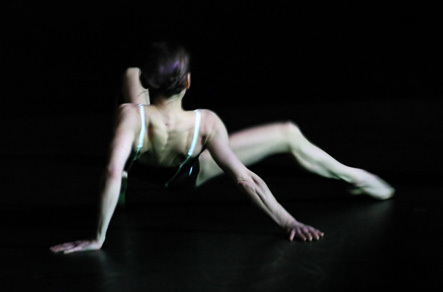 it can all begin again

After meeting for the first time in the Akademie der Künste Berlin in 2002, Christina Ciupke and Myriam Gourfink resumed their collaborative work again in 2003, producing the two solo pieces it can all begin again and kill the king. "We share a common way of thinking about dance, our movement develops in a slow time frame and within a sensitive space of perception, but this piece is more than a conventional collaboration. It is a mutual process of getting to know each other, an convergence," says Myriam Gourfink. Each dancer developed a solo, taking as her starting point choreographic elements, suggested by one to the other. She could transform these elements or exchange them in order to then again freely reinsert them into her own notations. Myriam Gourfink suggested to Christina Ciupke an open score composed of three vectors (movement, breath and mental focus), to which she added a series of restrictions (e.g. prohibiting this or that posture). For it can all begin again, Christina Ciupke concentrated her choreographic work on the interaction between the freedom permitted by the score and the restrictions given for its realization. Myriam Gourfink for her part redirected Christina Ciupke's principle of repetition by expanding the sequences intended for her into accumulative, rotational and transferal modes for different body parts. based on this, she wrote a score composed of 26 segments. In each performance she dances six or seven of these, also reading them real-time directly from the sheets of paper lying on the floor around her. The course of the solo kill the king is never exactly the same, it varies depending of the segments used, their arrangement and the resultant physical transition modes from one performance to another. Although both solos are presented one after the other, they form a construct that resembles a trio, or even a play of mirrors, in which the actions, the presence, the attentiveness of the actors, the formed space, the sounds, the light is reflected and multiplied. The music, composed and performed live by Kasper T. Toeplitz, connects the two dancers/choreographers and simultaneously accentuates their differences. We, the audience, are invited to attend a transition of bodies, of slowness, of the acoustic space. fixed points of reference become vague, movements in slow motion develop in spirals, sounds fuse, allusions lose themselves. Out of an abstract approach to movement a new story à la alice develops. (Geisha Fontaine)